That was Steve Day's (announcer) opening spiel for what would be the last new daytime game show to debut on network television. Caesar's Challenge aired on NBC in 1993 and 1994, but it stands today as one of the better shows of the 1990's. 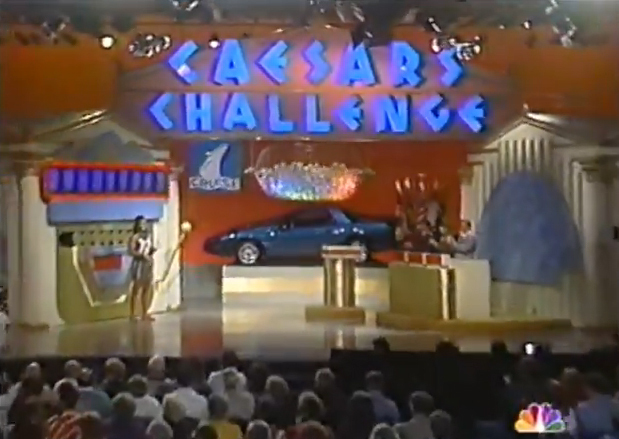 The series was produced by Rick Rosner, whose game show credits include Just Men (1983, NBC), Hollywood Squares (1986-89, Syndicated), and Studs (1991, Syndicated). Rosner is probably better known, at least in my opinion, for the police series "CHiPs" which aired on NBC from 1977 to 1983. Harry Friedman co-produced the show and is now producing Wheel of Fortune and Jeopardy. 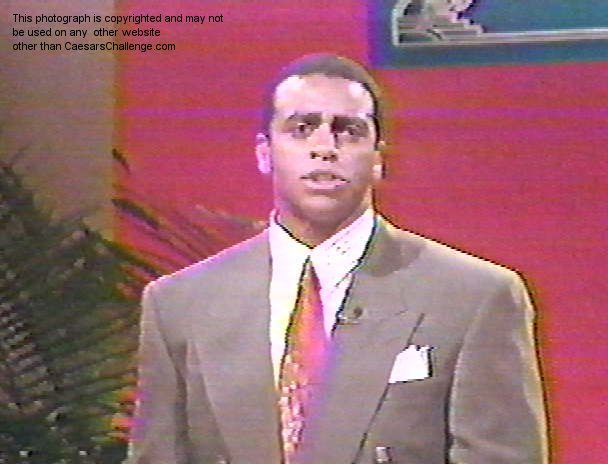 Centurion/co-host:  Dan Doherty
Hollywood named him as one of the Sexiest men alive.
At 6'6" 240 lbs of muscle, you can see why.
Mattel also made a doll of Dan. 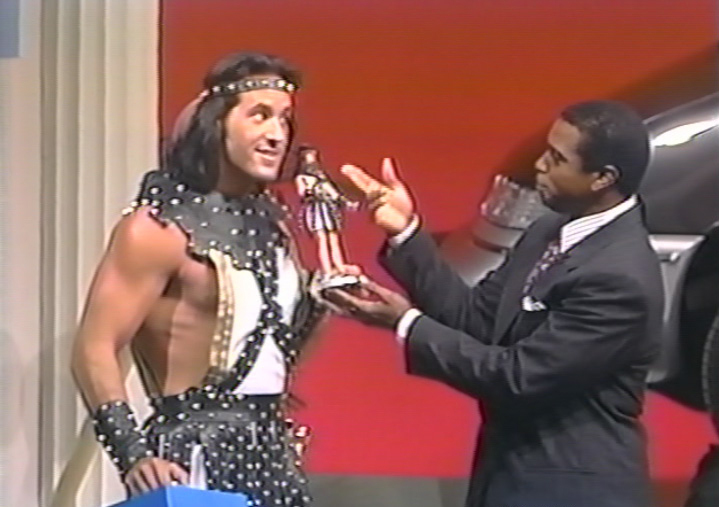 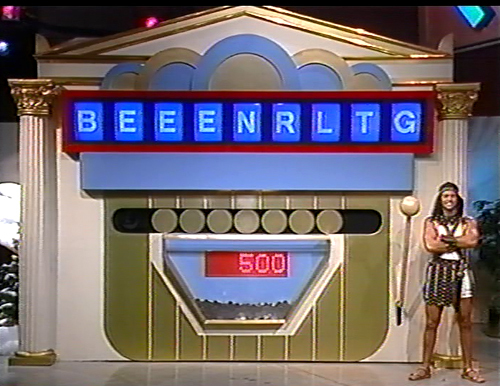 The main game was rather simple. The contestants were read a question with three possible choices. Questions and the puzzle related to a category announced by Rashad at the start of the puzzle. Later on, the category was only shown to the home viewers. A correct answer earned the contestant money and a chance to place a letter and unscramble (solve) the puzzle (See scoring structure below). An incorrect answer would mean the other players get a chance to answer. If one of them answers incorrectly, then the remaining player gets the money and a chance to solve by default. The contestant answering the question correctly would place one letter into its proper position, and then would have five seconds to unscramble the puzzle. There was a wrinkle, however. One of the slots (letters) was designated the Lucky Slot. If the letter belonging in the Lucky Slot was chosen, the contestant could earn more money, in addition to the value of the puzzle, by winning the instant jackpot if they solved the puzzle. The jackpot would start at $500 and increase by $500 for each puzzle the jackpot wasn't claimed, however the jackpot did not carry over to the next show. Three rounds were played, with two puzzles in the first two rounds, and as many puzzles as time allowed in the third round.

When time ran out in Round 3, a speed up game is played. The Lucky Slot is taken out of play and the letters are placed into position one at a time until a contestant solves the puzzle. A correct solve meant the contestant winning the value of the remaining unplaced letters. A wrong answer, and the contestant was out of the running and the others could jump in. The player with the most money after the end of the speed up game won the game, kept the cash, and got to go shopping, a la classic Wheel of Fortune. The shopping was done during the commercial break and the prizes chosen were announced prior to the start of the bonus game. 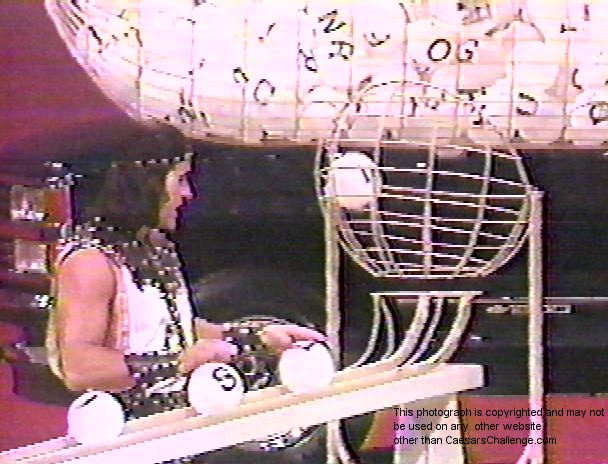 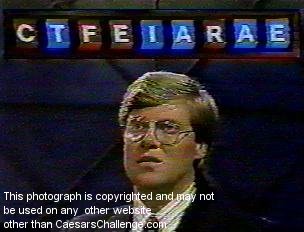 There were two bonus game formats used during the series.

In the first format, lettered balls came out of a spinning cage as Dan Doherty would read them out until a nine letter, dictionary certified word could be formed ("Caesar says STOP!"). The letters appeared on the board in the order that they came out and the contestant could place one letter into its proper position (One additional letter could be placed for each subsequent win). The contestant would then have 10 seconds to unscramble the word. If successful, (s)he won a car.
Former ATGS-er Tom Gauer (pictured lower right) was the show's all-time money winner. In four days, he won over $53,000 including an $18,000 Chevy Blazer. 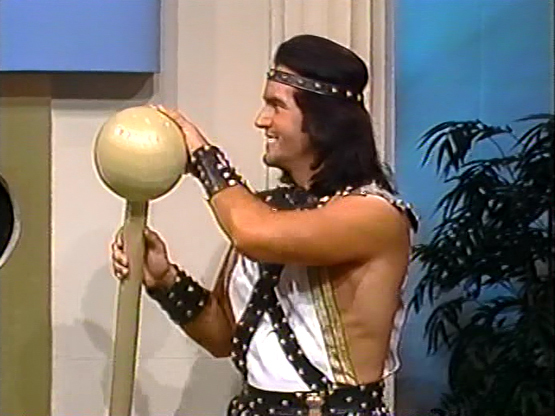 Some of the catch phrases used during the series..."Let the tournament begin." My favorite, said by Rashad during the first bonus format prior to the drawing of the lettered balls in the bonus round. In the second format, Rashad would ask Doherty to "reveal the tournament." And "At stake is this $xx,000 chariot..." Also said by Rashad when describing the car the champion had an opportunity to win in the bonus game.
Doherty and Rashad often exchanged "comedic" banter and funny jokes (Pictured above left). Doherty even used his popularity to "launch" his own brand of cereal on the show that Rashad described as laundry detergent. This was really a great part of the show as Rashad and Doherty neve rehearsed any of their skits and they always turned out very, very funny. 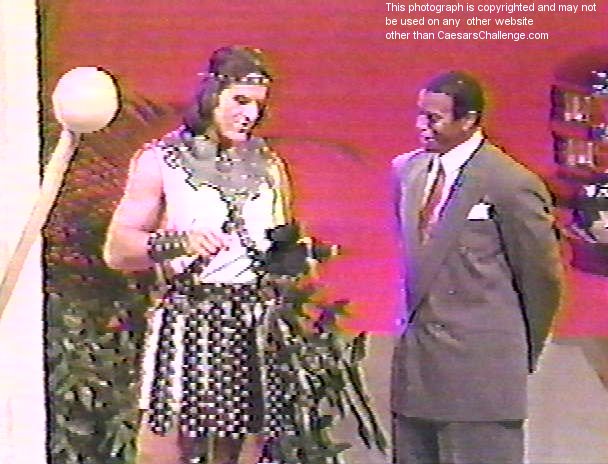 At the end of the show, Doherty and Rashad would go into the audience to give them an opportunity to unscramble 5-letter words and win casino tokens and gold covered chocolate medallions. 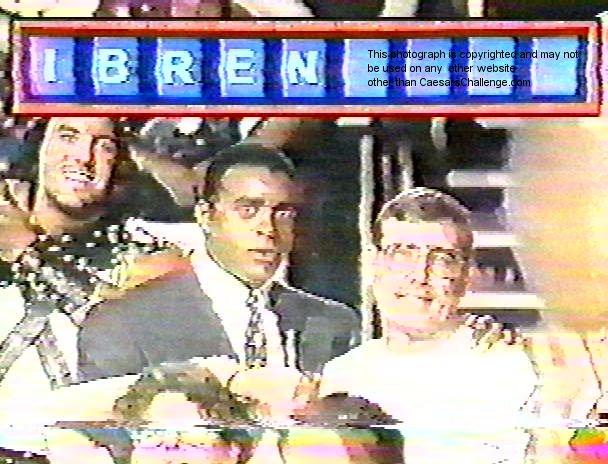